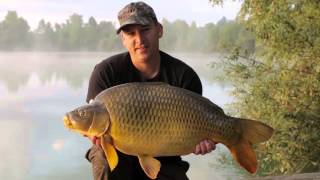 Simply put; one of the most stunning large carp around. It does not frequent the bank very often, but when it does it really sets the tongues wagging! First came to prominence in November 2008 when banked at 39lb and again in October 2009 when DF landed it at 42lb 8oz from Co's Point.

Then went on the missing list for nearly three years before turning up in Big Southerly nearly ten pounds larger at 50lb 4oz in July 2012. In July 2014, it was banked at 52lb 8oz from The Alamo and then it vanished again for eighteen months. It's next capture was from Big Southerly in December 2015 when it had put on a staggering eighteen and a half pounds, coming out at 71lb!

Steve Bartlett was the last person to catch it in December 2018, when it came out of Co's Point at 80lb. One of the real jewels of Gigantica and a target of many an angler. Who knows what it could weigh the next time it see's the bank.