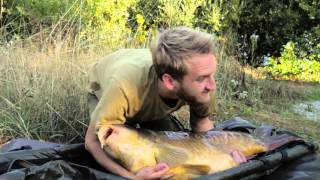 Chunky first came to our attention in 2009 when caught from Pole Position at almost fifty pounds. Then during the filming of the Gigantica European Carp Cup in July 2010, Jens Bunsen landed her at a spawned out 51lb 8oz from Co’s Point. Then she decided it was time to do a disappearing act for two years until June 2012, when she appeared from the Stink at 66lb, on a zig!

It then took a further two years before she slipped up again; this time to all round nice guy Andy Reynolds, who landed her from Oblivion on DF’s mates trip in October 2014, at a massive 73lb 12oz. Then guess what......another two year wait until October 2016 ensued, before she turned up again. This time it was next door in the Alamo where she appeared at 73lb.

At this point we did wonder if maybe she had topped out when she made a mistake in the December of the same year at 72lb 12oz from Alcatraz. She had put on a couple of pounds when Paul Warwick landed her from Co’s in May 2017 at 74lb 8oz, which was likely her carrying spawn. Then things started to get interesting!

After yet another two-year holiday John Allen captured her in August 2019 at 77lb 8oz from The Stink, which was really encouraging, as they are not usually at their biggest in the height of Summer. This proved to be the case, as Steve French went on to land her from The Alamo in January this year at a massive 82lb 8oz!

So what can we take from the nine captures of Chunky to help track her down. In terms of likely areas, she definitely prefers to spend her time feeding in open water, with Alamo and Stink accounting for four captures. We have no recorded Spring captures, with Summer and Autumn looking the most likely time for a capture. With the exception of a capture on a zig, Wafters and Bottom Baits have accounted for the remainder, except for one. John Allen’s capture from the Stink in 2019 came to a micro-corn hookbait.

We don’t know when we’ll see her again, but fingers crossed she has continued to keep on growing. Can she reach 90lb......we certainly hope so.