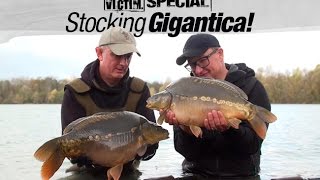 So named because inspite of being smaller than the lakes biggest residents it remains Danny F's target fish! He decided this when it was 51lbs back in summer 07! Dan says 'the shape of the fish, the shoulders, the massive black tail and grey flanks. I am mesmerised by it. It is my target!'.

It went missing for 4 years and then came out off Co's to a german angler in March 11 at.........69lbs 4oz! Night shots failed to show it in all its glory but it looked angrier than ever! How has it put on 18lbs in 4 years and not seen the bank?

Danny T caught it in October 11 at 66lbs, much to the disgust of Danny F, 'you may as well have slept with my missus! Only joking but it remains Dan F's number one Target!